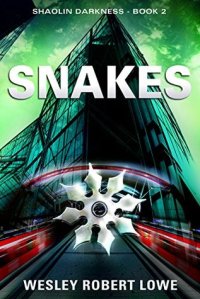 Severely burnt and in rehab, Chin commissions his son, King, master and connoisseur of all things connected to snakes, to lead the savage charge to recover the family’s illicit fortune.

King, with clandestine military precision, hounds Micah as he accompanies his mentor on a journey of death and adventure to Heaven, the mystical Kung Fu monastery in the mountains where the aged master learned The Way of the Shaolin.

With a story that moves with the speed of a Ferrari, yet with the breathtaking drama of Star Wars, SNAKES is a rich story of experiences never seen that will entertain even the most adrenaline-charged reader.

INTERVIEW WITH THE AUTHOR

Q. What is unique about the Shaolin Darkness series?

A. There are many talented action and thriller writers out there: Russell Blake, James Patterson and the late Robert Ludlum are three that I particularly admire. I want to write books that have the electrifying action, intrigue and suspense that are hallmarks of their best sellers.

That said, I am a product of East and West, Chinese heritage born in America. I grew up watching Bruce Lee and Muhammad Ali, reading Mario Puzo and Amy Tan, and wanted to integrate the “Orient and Occident” into my stories. Shaolin martial arts training, organized crime, Triads, the Tao, Confucius, Christianity, Hong Kong, New York, Shanghai, Portland” novels that show the contemporary world as a multicultural, multi-dimensional, inter-racial society.

The Shaolin Darkness series is like that. The heroes and villains are more than pulp fiction caricatures but have deep, even pathologic personalities. Murder, madness, and mayhem ”” with an on again, off again romance that drives our young protagonist crazy.

Q. There is an extraordinary amount of violence, including brutality against animals. Is this really necessary?

The underbelly of the world does not battle using Gentleman’s Warfare principles or conduct meetings with Robert’s Rules of Order. The lives of humans and beasts are insignificant. Bloodshed and assassination just go with the territory. That being said, none of the violence is gratuitous and are essential story elements.

Q. What order should I read the books in?

A. While each book has its own complete story arc, I suggest reading them in numerical order.

The short 10,000 word prequel, UNLEASHED is not necessary to appreciate the series but is a great case study in the making of a psychopath.

Q. You’re a pretty new author. Why should I give you a try?

A. Fair question. I launched the Shaolin Darkness series May 2014 and the first books have hit the Top 50 Bestsellers in several categories of Kindle. I try to make sure that each new release continues with creative action, unexpected twists and turns and riveting stories.

I write what I know and care about.

But ultimately it is knowing and experiencing the lives of people that provide the impetus of Stories that Grip the Soul.

Wesley Robert Lowe is an award-winning writer, filmmaker and composer (including four seasons on Sesame St.).