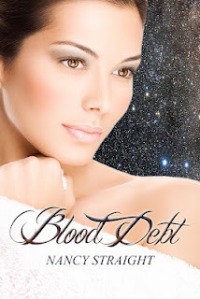 Her whole life, it had just been the two of them. Before her mother’s last breath, she gave Camille the information she had craved her entire life: the identity of her father. Daring to contact him, Camille was welcomed by an entire family she never knew existed. But nothing comes without a price, as she discovers when her family claims a legendary heritage tracing back to a centaur touched by Zeus.

As she learns the secrets of her Centaur bloodline, she is drawn into a forbidden love with Drake. Her life may be the blood debt required to pay for her mother’s transgressions. The same person who once held her mother captive, and forced her into decades of hiding, now controls Camille. Her only chance is to seek a piece of her mother’s past that will win her freedom and the life she desperately wants.

Let me just say that I absolutely love this book!

When Nancy Straight first announced on Goodreads that she was having a contest for the title of her series about a bloodline that goes way back to the time of Zeus, I was excited.

At first I was thinking of the title The Centaur Bloodline, but I felt like, the title might already reveal the mystery of the story, so  I agreed with the others that Blood Debt would be a perfect title. To me, it sounded mysterious enough 🙂

Truth is, I haven’t read any book touching a topic about centaurs (well, except for the Percy Jackson series but that was a children’s book and centaurs there were of the minority) so I was ecstatic about Straight’s concept that I made sure of getting the book once it got released on amazon. And of course, I was not disappointed. I couldn’t put the book down! It’s definitely a page-turner!

The story began with Camille and her dying mom where she learned about her long lost father ten minutes before her mom’s last breath. Cami soon embarked on a journey to finding her real father and found out that she actually have, not one, but five attractive brothers. I really enjoyed the characters especially the Strayer brothers and their strong kinship with their step sister Camille. When I noticed how they were more than willing to welcome her in their threshold, I got this strange feeling that something was up. And there’s Gretchen, the family’s matriarch who was so sweet and accepting;  and that’s when I realized I didn’t want to put my Kindle down until I finished the story.

I thought I would hate Gage, the man who was supposed to be Cami’s future husband, but I was wrong. I actually liked him. And there’s mysterious Drake! Cami and Drake seems to belong with each other, but I cannot really say that they’re gonna end up together because there’s still a second book to watch out for. I would love to see Cami get her Centauride powers ’cause that would definitely be a kick!  I am also definitely intrigued with the other characters, like Gage and Bianca, Daniel and grandma Zandra and I am excited to read more about them and how they would fare on the sequel Blood Ties.

Once again, Nancy Straight created a masterpiece! I loved her previous series (The Destiny series) and I am sure that Touched would be a bestseller too.